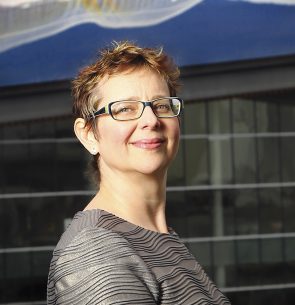 How can we enhance public spaces in cities so that they engage individuals and community? What can encourage us to slow down and take a moment of pause in our busy lives? Janet Echelman ​’87 ​shares her journey exploring these questions in cities from ​London, Amsterdam, and Boston to ​San Francisco​, ​Singapore, and Sydney. ​A […]

Janet Echelman is an artist who defies categorization. She creates experiential sculpture at the scale of buildings that transform with wind and light.

She builds living, breathing sculpture environments that respond to the forces of nature— wind, water and light — and become inviting focal points for civic life. Exploring the potential of unlikely materials, from fishing net to atomized water particles, Echelman combines ancient craft with cutting-edge technology to create her permanent sculpture at the scale of buildings. Experiential in nature, the result is sculpture that shifts from being an object you look at, to something you can get lost in.

Recent prominent works include: “As If It Were Already Here,” a monumental sculpture suspended over Boston’s Greenway; “Impatient Optimist,” a new iconic piece for the Bill& Melinda Gates Foundation campus in Seattle giving visual from to their mission; “Skies Painted with Unnumbered Sparks,” a 745-ft sculpture that premiered at the 2014 TED Conference; “Water Sky Garden,” a commission for the 2010 Vancouver Winter Olympics; and “Every Beating Second” in San Francisco Airport’s new Terminal Two.

Recipient of the Guggenheim Fellowship, the Harvard University Loeb Fellowship, a Fulbright Lectureship, and the Aspen Institute Crown Fellowship, her TED talk “Taking Imagination Seriously” has been translated into 34 languages with more than one million views. Ranked number one on Oprah Magazine’s List of 50 Things that Make You Say Wow!, she was named an Architectural Digest Innovator for “changing the very essence of urban spaces.” She recently received the Smithsonian American Ingenuity Award in Visual Arts, honoring “the greatest innovators in America today.”